on May 02, 2018
In Part 2, I went through some of the process of using the Patch function to write complex SharePoint columns type such as Lookup, Choice and People.  In this final part I'll build additional functionality to my demo app to allow me to add the current user into a People column that allows multiple people to be added.  The important requirement is to maintain any existing users in that field.

The Patch function has one major drawback in this scenario, which is that it has no concept of 'Append' when patching a field with multiple entries.  It will always erase the field entirely and then add the new item(s).  Let's go back to me Project app and add a new button, we'll label it 'I'm on the Team' and position in under the form to the right of the display, as shown here 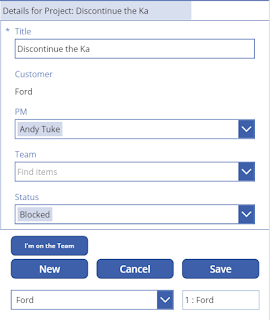 The Team field is currently empty so I could Patch the current user into that field in the same way I did with the Project Manager field in my previous post.  However, as stated above, if there were already members of the team in that field then they would be removed.  I had wondered if the Collect function might be suitable and so tried an OnSelect function of

Unfortunately this simple option doesn't work, even though there are no errors shown either in syntax or execution.  The only option we have left is to build a collection locally from the existing user list, add the current user and then Patch that back to the SharePoint list.  The OnSelect function to achieve this is

There are 3 components to this.  The first ClearCollect creates an empty collection called varUserList, and then adds the user items from the Team field of the currently selected project.  If we ran this line only, we could see the collection in the editor and would be able to see the columns that are produced; namely Claims, Department, DisplayName, Email, JobTitle and Picture.  When we add the current user, we will have to match these same columns, so the Collect statement that follows does exactly that by passing in the relevant output items from the User() function.  The Claims item is simply a string containing i:0#.f|membership|followed by the user email in lower case.  At this point we now have a list of suitably structured user items in our collection so we simply Patch that list back into the Team field of the selected project.

I have used similar code in creating company event apps, where we have an 'I'm Attending' button attached to the event display.

That's it for this post, please comment below if there are any additional issues with complex data fields in SharePoint lists or if there is anything else you would like me to write about. 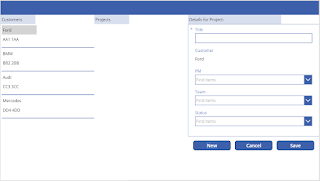 All about lookup fields when using SharePoint lists - Part 1, Default values in forms

Sometimes, if you're anything like me, you have to think that life should just be simpler.  Lookup fields in SharePoint when used as part of a data source in PowerApps is without doubt one of those things. There are a few posts and videos where people have explained the concepts, some of which are very good, but I thought I  would add my own so that all the variations can be documented in one place.  At the very least it gives me somewhere to go to remind myself how to configure this. I'm going to build a basic app to manage a list of customers and a set of projects associated to those customers.  This is going to be held in a couple of SharePoint lists, one for customers and one for projects.  The list settings for each look like this Customers Projects As you can see the Projects list has a lookup column that refers to the Customer list. Lets build a basic app using both these lists as a data source, I am going to add a single screen with 2 galleries an 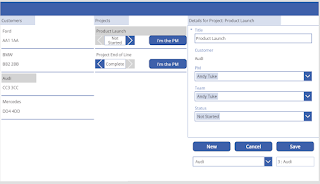 In Part 1 I explained how to use an Edit Form to update a lookup field in SharePoint using the Project/Customer relationship as an example, and in particular how to set a Data Card on the form to have a default value in the lookup column. Now I'll go through using the Patch function to set fields to specific values when those fields are the 3 complex types I have in my projects table, which are Look Up, Choice and People picker. The LookUp Field Let's go back to my Project app and add a DropDown control below the New/Cancel/Save buttons and call it ddCustomerPicker.  What we're going to do with this is to populate it with the choice of customers and allow the user to change the customer of the current project.  This is probably not something you would need to have in an app like this but its a good example of the code. The first thing we need to do is populate the drop down with the customer names, we do this by setting the Items property to this Choices(PA_Proje

Welcome to My PowerApps Solution blog

So I've finally taken the plunge and created a blog.  I've been putting of doing this for various reasons for years now but finally I've started using a product that I've appreciated learning so much, and seems to be in its early days still, that it seemed a good idea to make a start. I've been teaching myself PowerApps for 6 months now, and have spent considerable time and effort learning some concepts which I would have appreciated having resources like I hope this blog will be to help me get started.  I've now developed a number of applications of various sizes, some internal, some for customers in my role of Solution Consultant at EduServ in the UK.  So far I have worked primarily with SharePoint as a data source but I'm keen to explore other options such as SQL and CDS which I will write about as I learn. My plan is to describe various challenges that I've had to solve for projects that I've been working on, as well as ideas I've picked